What will you do if China has an economic meltdown?

For a while now I’ve been concerned that due to China’s massive appetite for debt it was going to experience a severe correction. When you consider the debt levels in China, they absolutely dwarf the levels the USA experienced during the global financial crisis of 2008. So where is China at now and are the debt levels like an elastic band that is being stretched more and more?

It’s estimated the total Chinese debt-to-GDP ratio has risen to 317 per cent at the end of 2017. Compared to 158% at the end of 2008 means this number is continuing to rapidly increase. 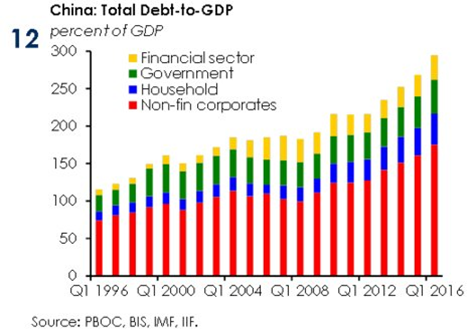 In real terms this means the amount of debt in China grew to RMB 262.1tn at the end of 2017, representing a year-on-year grown of 13.5 per cent. Considering China’s nominal GDP growth was at 11.2 per cent yoy in 2017, the rate of credit grown continued to exceed the rate of nominal growth.

The International Monetary Fund (IMF) pointed out in 2016 that it took four units of debt to raise the GDP by one unit. A decade ago the ratio was 1.3 to one. It’s clear that China has a serious debt problem that could potentially drag the global economy down.

The flip side of the coin is that the Chinese government debt is comparatively low, and the balance sheets of the main Chinese banks remain strong. The problem is this all hinges on true and transparent reporting practices. What the GFC clearly showed is that when there are massive amounts of money at stake then short-cuts (ie. fraud) is a very likely driver.

I recently read an article on the rapid increase in consumer credit in China off the back of a massive housing boom. The story indicated that it is almost impossible for an average worker to buy a house in the major cities and that they are now investing in apartments in third tier cities while renting in the city where they work. 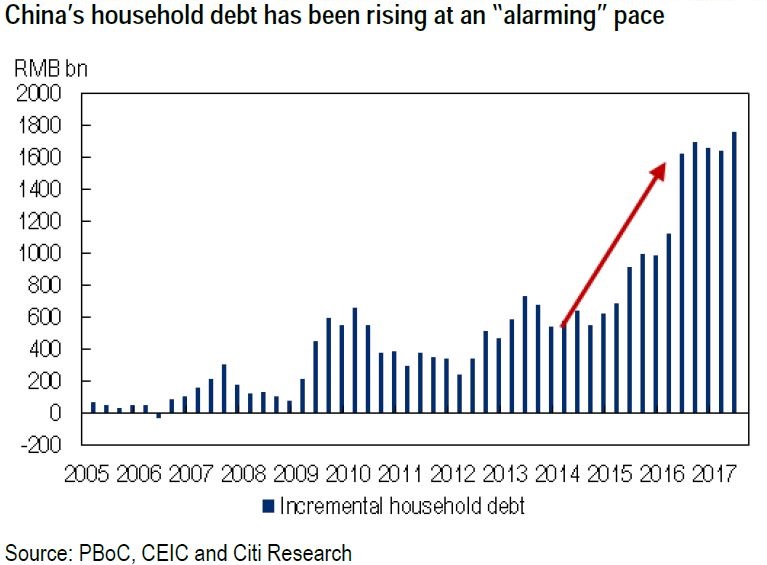 Relatives are often helping to fund the deposit and credit is used to purchase the property. This has resulted in the real estate in some 3rd tier cities increasing by over 30% in a year. The following graph shows the increase in China’s household debt and how the once cashed up Chinese are gobbling up credit at an alarming rate.

In my reading I’ve found there have been pundits saying that everything is well and good with China and then there are the doomsayers that believe a global financial catastrophe is just about to happen. What I do see is the elastic band getting tighter and tighter.

What should you do?

What do you do if you’re a domain investor if there is a potential Chinese cliff the world economy is going to fall over? I learned a few things through the 2008 GFC and one of them is that getting cashed up isn’t such a bad thing. If you were thinking about buying a new car on finance, then you may want to look at your old car with a bit more love.

Secondly, deleverage yourself as fast as you can. If you have credit card debt (heaven forbid!), car loans or any other sort of debts then get rid of them as fast as possible. It’s better to clean them out and increase your mortgage than it is to have some of those sitting around your neck.

Thirdly, if you have borrowed to buy some domains then it’s likely to have pretty hefty financing costs……either sell the domains or get rid of the debt via some other sort of asset sale. It may sound a bit drastic but if there is a crash then it’s going to be a big one…..

What I’m saying is that you should look at doing everything you can to reduce your monthly commitments. It’s not such a bad thing to do even if there isn’t a crash. I'd even recommend going around your house and asking the question, “Do I really need this?” If you don’t then sell it. There's nothing like a bit of decluttering anyway.

I think that in a crash there will be a lot of opportunities to buy some very cheap high performing assets. I remember that in the GFC I picked up some great portfolios because some investors forgot they had to pay tax. My advice is, China may not fall but be a good scout and “Be Prepared”....the worst case scenario of you'll be a little more financially prudent.

I should finish by saying that everyone is in different financial circumstances. I would highly recommend that you get proper advice for your own situation prior to making any drastic changes to your own financial setup.

Please feel free to leave any of your own thoughts here about where you see the global economy is headed.

Tags china debt
PRINT
Cookies make it easier for us to provide you with our services. With the usage of our services you permit us to use cookies.
Ok