One of the most misunderstood metrics that is bandied around by domain owners is the term Earnings Per Click (EPC). Everyone assumes they understand what it is but very few people have come to grips with how it’s calculated. In this short series of articles, I will pull apart EPC and show how it’s calculated so you can be in the know.

I was inspired to dive into this topic largely because I read a thread on a forum recently and it was clear that there were a lot of misconceptions about EPC that needed to be cleaned up.

I need to apologise for some of the maths in this series. The domain monetisation industry lives and dies by numbers and there's just no getting away from them. I should also say that domain parking is very much alive and well. The main reason for this is advertisers want our extremely valuable traffic.

So let's get too it! We need to define Earnings Per Click in terms of a mathematical formula….it’s initially not that complicated so don’t panic.

This seems pretty obvious but we need to dig a little further into the definitions of both Revenue and Clicks.

When you look at your stats for a domain at a parking company you are seeing the AVERAGE revenue the domain makes across a period of time. The shortest period of time that can be viewed is one day but it’s still an average.

I’ve seen domainers complain continuously about the fact they seem to earn a large amount on one day and a small amount the next for a particular domain. There is a second factor that comes to play in this averaging process.

Everyone seems to assume the demand curve for a keyword is completely horizontal and yet this couldn’t be further from the truth. In some cases, there is a sharp drop off in the price willing to be paid by the advertisers for the domain traffic. An example price/demand curve could look like the one below. 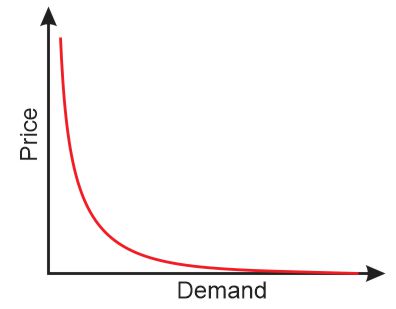 The sharp drop off means the EPC paid would fluctuate greatly depending upon where a user clicked on the page. Typically speaking the higher EPC advertisements are placed at the top of the page and the lower paid advertisements further down the page…..but with Google’s move to psychographic targeting of users this isn’t always the case (and this complicates things immeasurably).

There is a different shaped curve for every market vertical and sub-vertical for that matter. This will greatly influence the dynamic nature of the EPC rates.

In the example above, a low traffic domain means fewer clicks on the page and the averaging would not be felt as much. This would create the wild fluctuations in the EPC rate that many domain investors currently experience. 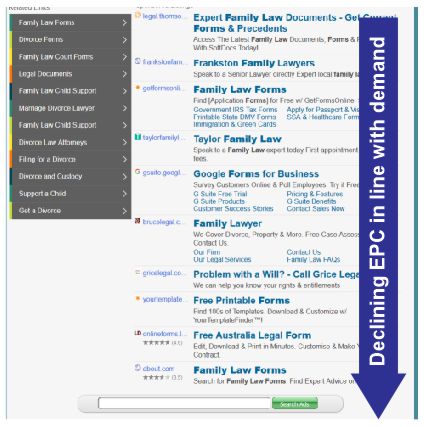 One of the many challenges that all parking companies must deal with is bot clicks or even worse, fraudulent clicks. These clicks should be stripped out otherwise advertisers would be paying for clicks that have no opportunity to generate revenue.

Because all parking providers apply different filters to their click traffic the “No. of Clicks” or denominator can vary greatly from one provider to another. This also means you can’t compare one provider’s EPC versus another provider.

So now we have an approximation for the EPC and the formula will look like.

In the next article in this series I'm going to really dive into the mathematics that make up the EPC and prove why conversion is so important for all domain owners.

Tags domain parking parking traffic monetisation earnings epc
PRINT
Cookies make it easier for us to provide you with our services. With the usage of our services you permit us to use cookies.
Ok